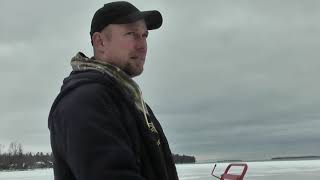 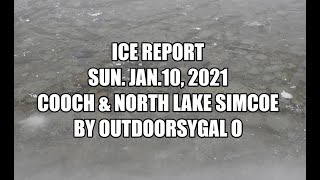 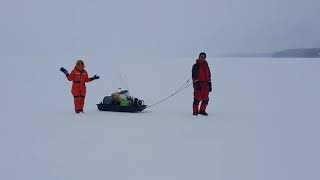 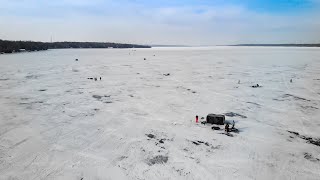 Lake Simcoe Ice Conditions & Fishing update from the ice hut operators
- We do not recommend using these maps for navigation purposes!
- www.fishinglakesimcoe.ca, site owners, sponsors and those reporting are not responsible for any mishaps regarding these reports!

If you know the ice conditions around Lake Simcoe and surrounding lakes please share with others. You can submit your information: ice thickness, distance from shore, exact or approximate location on the map, location of dangerous spots; pressure cracks, attach pictures, YouTube video to your ice report. Your important information may help others play safe on the ice.

This annual event with a $10,000 guarantee first place prize, takes place in Cooks Bay out of “Keffers” off Raynards Road in Keswick. Cooks Bay is one of the most heavily fished areas of the lake … and other than the occasional pike angler, almost all the angler effort is targeted towards yellow perch. Many believe this is why you generally find far more small perch here … as too many anglers are still apt to upgrade their catch and keep only the biggest ones for the fry pan. Still, having said that – some of the lake’s most amazing jumbo-king’s still reside here amongst all their smaller brethren and today my quest was to find out where these wily ol goats hang out within the general area where I would guess the organizers of the Lake Simcoe Ice Fishing Championships will put us come Sunday February 18, 2018.

1) Accept Climate Change! It’s taken me awhile to accept that in my neck-of-the-woods (Lake Simcoe 40 minutes north of Toronto ON) late season ice is nothing like it used to be and there are no signs this will change anytime soon. It seems like just a few short years ago that I would be writing about that glorious perch bite that really doesn’t begin until early April – long after all the huts had to be off and lake trout and whitefish season was closed. That bite often lasted until mid-April and would consistently see perch moving in shallow right next to adjacent spawning sites.  Days of 100 or more jumbos were not uncommon and we’d take great pride in breaking the magic two pound barrier time and again. Unfortunately – those magical days and that typical late ice period has changed dramatically – but the perch fishing can still be absolutely incredible if you adapt to the changing conditions and accept climate change!

For the last several years I have been fortunate enough to enjoy a winter fishing vacation at my buddy’s camp in northern Ontario, just south of Gogama. Gerry Heels has a cabin up there with two ski-doos that we use to fish different lakes each day. We usually go up there for a week around New Year’s and try to get in around mid-March as well.  Our target species include lake trout, splake, brook trout and occasionally rainbows.  One of the main lakes up there only has a short winter laker season, from mid-February to mid-March, so we planned our trip to coincide with the last few days of the lake trout season.

Crosslake, MN (November 5, 2014) - What if, rather than carrying that smartphone or tablet in your hands, technology allowed you to actually "wear" these indispensible devices? Imagine having the device always at the ready in front of your eyes, convenient, low profile and completely hands-free.